Palenque, in the footsteps of the Maya in Mexico 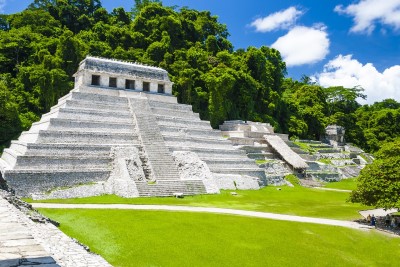 Located in the state of Chiapas in Mexico on the border with Guatemala, Palenque or Lakam Ha (Great Waters in Maya) is without doubt one of the most beautiful Mayan sites in Mexico. More than 1,400 buildings have been inventoried to date, but many structures remain covered by forest, and according to UNESCO -which designated the site a World Heritage Site in 1987- only 10% of the ancient city’s surface area is known. The visitor in search of history and exoticism will be delighted by the carefully preserved temples, pyramids and palace. All this in the middle of a lush forest.

Fortunate discoveries have made it possible to learn about many aspects of Lakam Ha‘s history, which has been marked by natural disasters and wars. The Maya founded the city around 100 BC and the city reached its peak between the 6th and 8th centuries AD. Several rulers succeeded each other, the most famous being King Pakal who reigned from 625 to 683. The constructions visible on the site were built during his reign and that of his son, from 683 to 702. From 799 onwards, the city was abandoned by its population without researchers being able to give a reason for this. 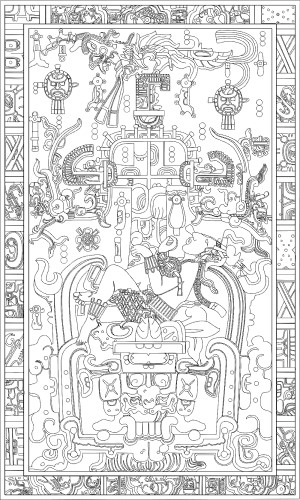 Bas relief of the Pakal sarcophagus

It was rediscovered by a missionary in 1567, but it was not until the end of the 18th century that the Spaniards began to take an interest in the ruins during expeditions that would last until the 20th century, notably those of the English explorer Alfred Maudslay who devoted his life to the study of the Maya remains.

In 1949, a team discovered the tomb of King Pakal (K’inich Janaab’ Pakal in Mayan) under the Temple of Inscriptions. This temple stands at the top of a pyramid some twenty metres high. It owes its name to the numerous glyphs found on the spot which relate the history of Palenque between 514 and 672. A narrow passage leads to the king’s tomb. The tomb, covered with a stone that illustrates the king falling into the mouth of the world at sunset, is no longer open to the public, but a faithful reproduction of the burial chamber can be seen at the National Museum of Anthropology in Mexico City.

Close to this temple is the tomb of the Red Queen, named after the colour of the sarcophagus. She is said to be the wife of Pakal.

The Palace is another remarkable building in the Mayan city. It includes several buildings and numerous rooms where it is possible to admire the decoration and bas-reliefs. A four-storey tower, which was to serve as an observatory, dominates the complex.

In the middle of the jungle, between the calls of howler monkeys and tropical birds, the visitor can admire a magnificent waterfall between the Otolum river and the Bat stream on the way to the museum. It is a very interesting complement to the visit of the ancient Mayan city which allows to admire monuments, sculptures and objects of the everyday life discovered in Palenque!