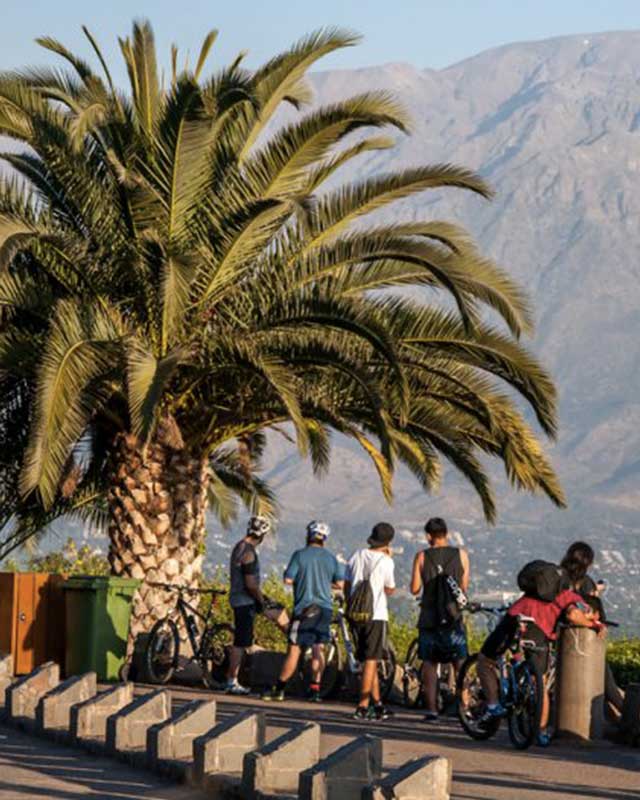 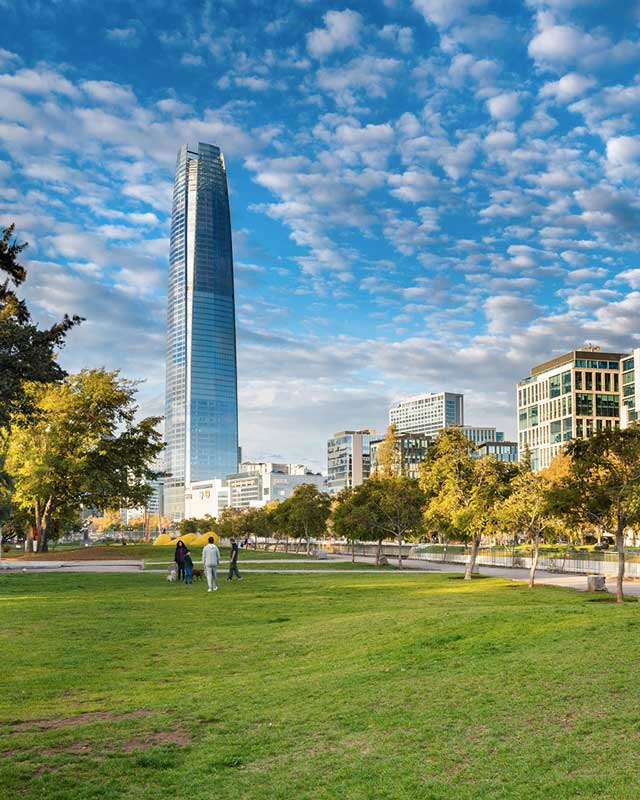 Santiago de Chile is the entry door to Chile. Important capital for trade and finances, it is a charming provincial city overlooked by the snow-capped Andes. A historical center well preserved will immerse you in the heart of ancient and contemporary history of Chile. Direct flights with Air France and via Madrid with Air Europa as well as with Iberia.

Santiago, the visit starts at the heart of the city of Santiago, which harbors La Moneda (government palace), Square of Arms and the buildings of the judiciary and executive powers. The Pre-Colombian art museum offers a didactic collection based on the most important ancient cultures of Latin America.

Neighborhoods for restaurants, bars and shopping are Providencia, Bellavista, Las Condes or Vitacura.

Climbing San Cristobal hill or Metropolitan Park to admire the pathways surrounded by greenery and look upon the city.

Maipo Valley – Approximately two hours away from the capital, the beautiful area lead by the wine-growing region and hostels.

Viña del Mar – one hour and half away from Santiago and facing the Pacific, is Chileans’ preferred beach resort.

Valparaiso – Approximately three hours away from the capital, emblematic port remains still the splendor of the 19th century Chilean history. Go up by funicular to the uptown to take in the colorful houses marked out by winding roads, many stairs and pathways.

To remind it, each home was built by Neruda in tribute to each of his spouses….. 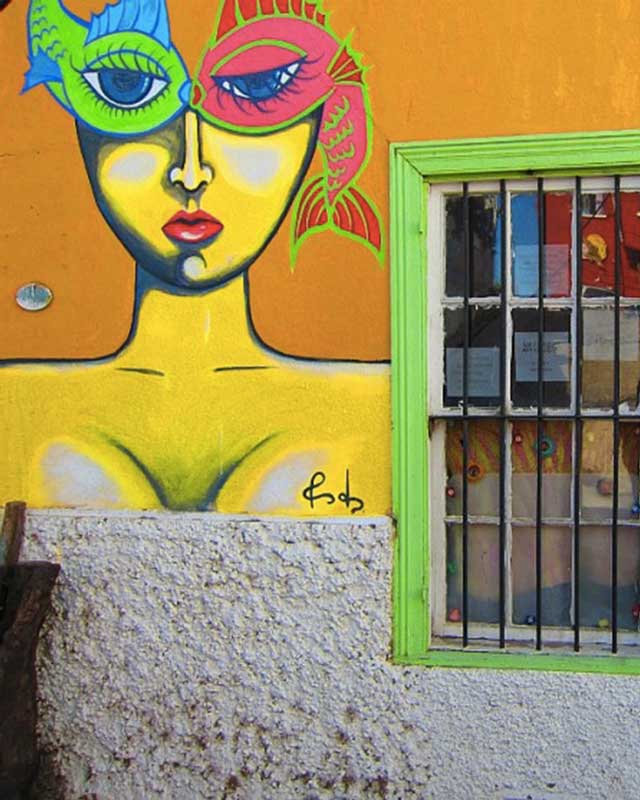 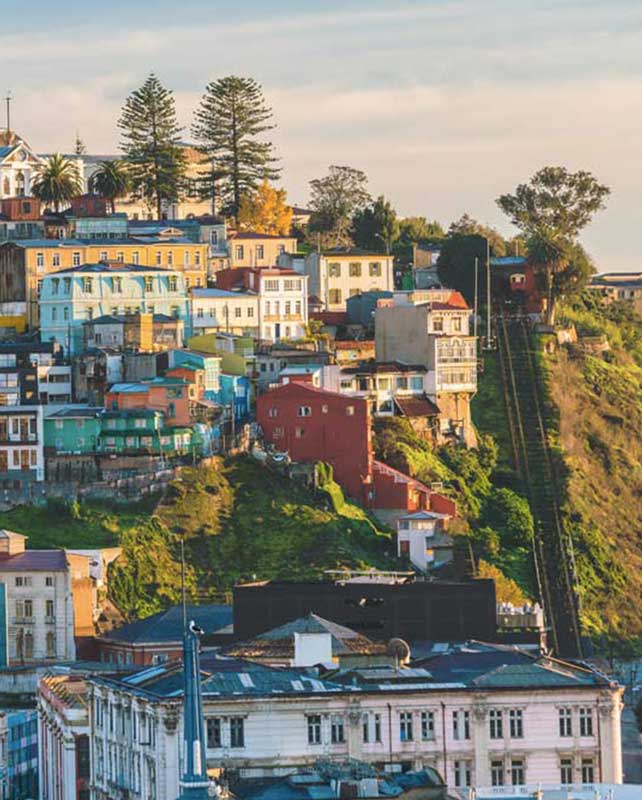 Long ago, the region was inhabited by real Atacamenos, this desert in heights displays unique landscapes shaped by salt, clay and sand:  the Moon Valley, the salt lake, the Andes red mountains. Place of contemplation and nice walks at the heart of the Nature, on foot, on horseback and by 4X4 vehicle. To be highlighted the impressive Tatio geysers with the water jets to be seeing at dawn. Best season to visit: from April to November.

To reach the desert, daily flights from Santiago to Calama, the door of the desert. Close to the city, the world greatest open sky copper mine, Chuquicamata, make thousands of miners work. A visit can be arranged but needs to be organized beforehand. Two hours driving through from Calama to San Pedro d’Atacama, great charm oasis city and point of departure to reach the close desert. 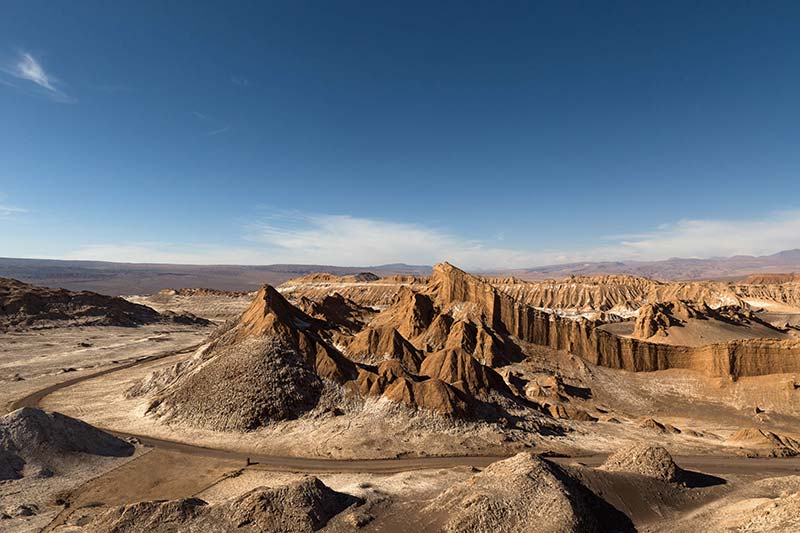 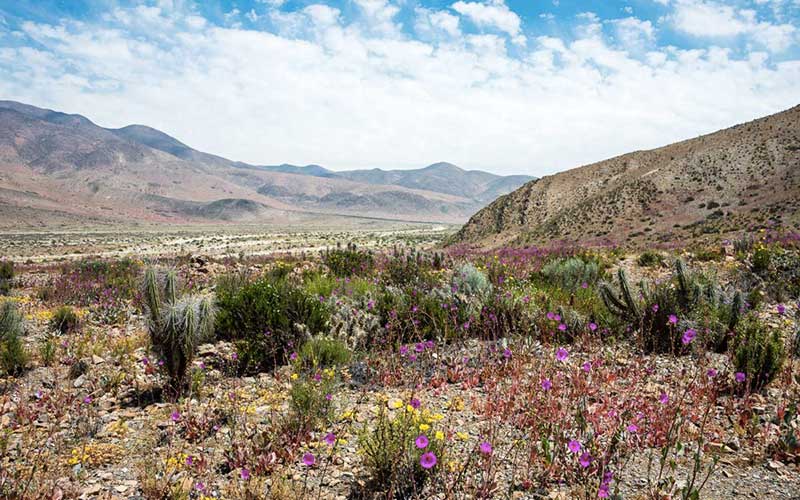 A walk through the village in order to visit San Pedro Church built in clay-brick and the archeological Gustavo Le Paige Museum tells part of the story of the Atacamena culture, the real native people of the desert. Their descendants keep their ancient traditions.

Next to San Pedro, the visit of Pukara de Quitor indigenous fortress built in the 12th century.

Evening walk to observe the starry sky. Atacama Desert is considered as one of the best observation point in the world for the stars and some on site are astronomical observatories.

The Atacama Salar, salt lake occupied by pink flamingos surrounded by the Andes and most particularly by Lincancabut volcano.

The Moon Valley, approximately 30 minutes away from San Pedro, supernatural mineral landscape made up of salt dunes, clay and sand.

The Tatio geysers, at 4300 meters of altitude, to be visited very early in the morning to contemplate the boiling high water jets released by the earth depths.

Leaving from San Pedro, to Bolivia to discover the lagoons Verde and Colorada as well as Salar Uyuni.

Around the village many other villages such as Toconao, Chiu-Chiu are reachable.

REGION OF THE LAKES 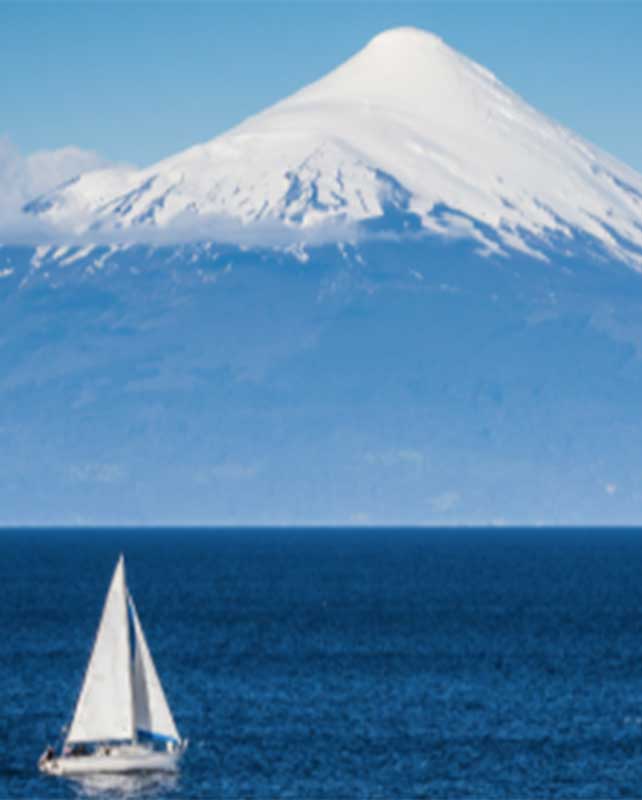 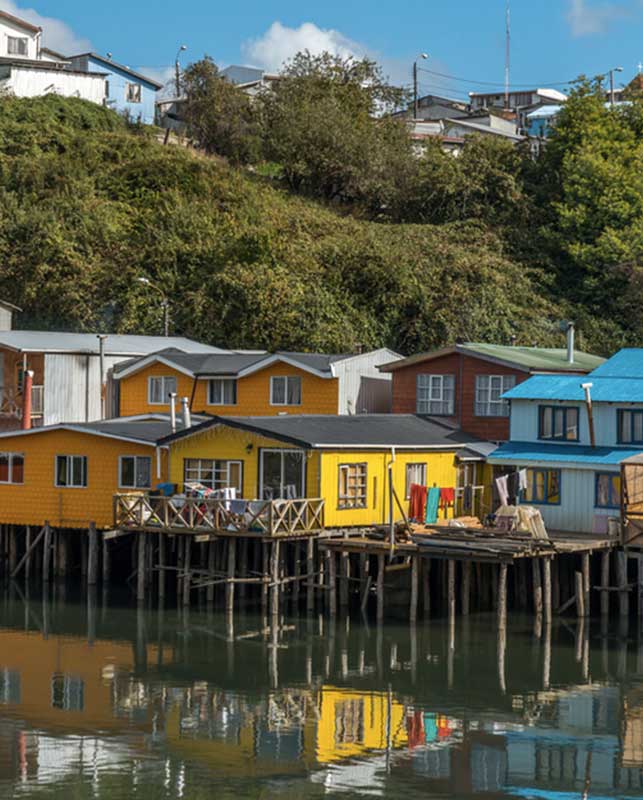 From Santiago to Puerto Montt, two hours daily flight, and you arrive to Patagonia…

Chiloé Island, surprising landscapes and by all the churches and wooden chapels designated Unesco World Heritage Site. It is also land of the indigenous community Mapuche. 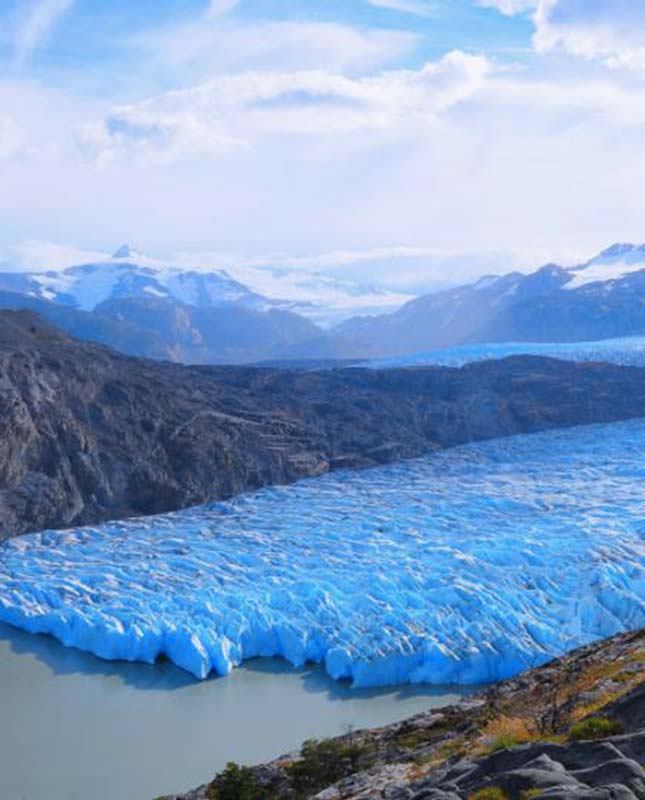 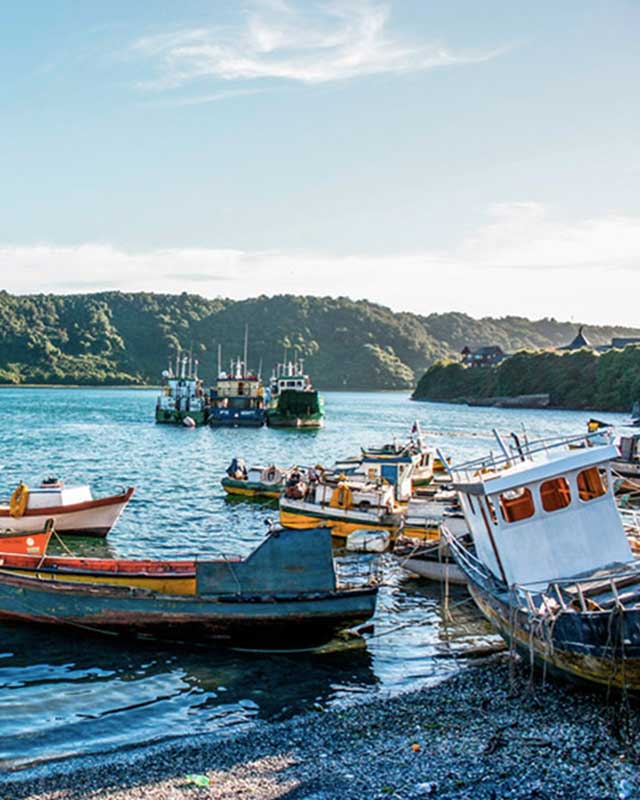 The extreme south of Chile is an amazing region for its beauty and the variety of its wild and authentic landscapes. Observation of fauna and flora, penguins and whales ; trekking between mountains, forests, navigation between millennia glaciers, or the fjords, all make it a ‘must-see’ destination of Latin America.

Remarkable sites set the scene from North to South 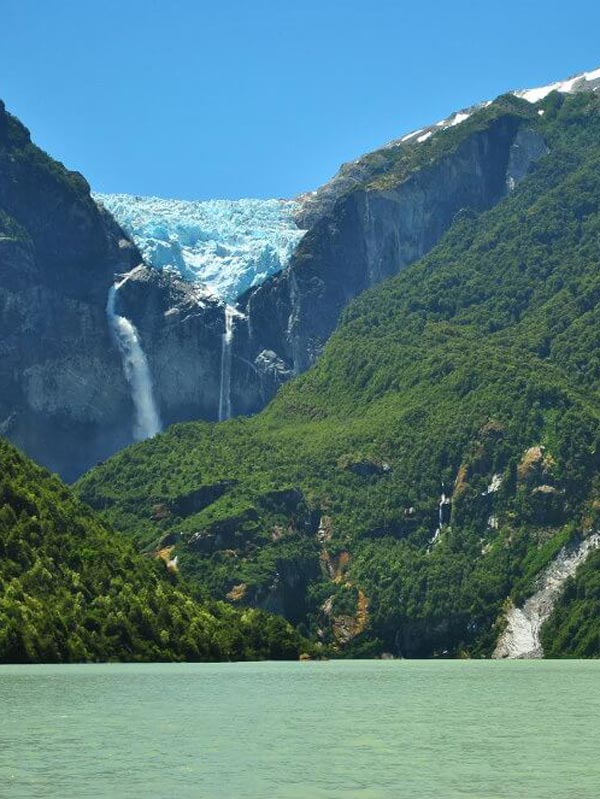 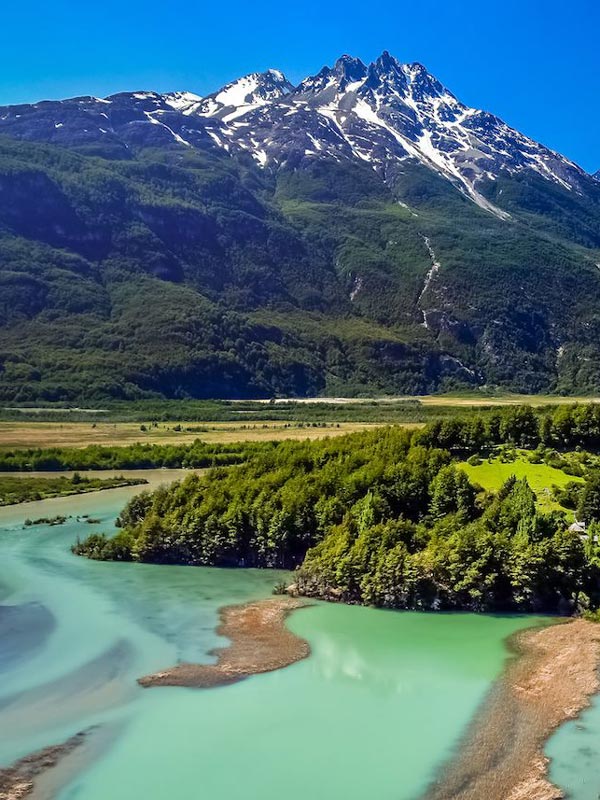 Come discover the unique and wild landscapes of this very rich region. Stop by the Plaza de Armas in Coyhaique at its craft market, where you can find many souvenirs made of local wood, leather, stone or wool!

You can make treks between the Cerro Mackay and Cerro Castillo hills, day hikes or five-day treks and 45km for more experienced trekkers. Admire the hanging glaciers and snow-covered passes in all seasons. These landscapes will leave you speechless!

The region of Aysen is home to as many spectacular landscapes such as the Northern Patagonian Ice Field, a 4,200 km² ice cap. You will also discover the Queulat Natural Park, an impressive protected park where you can hike on paths surrounded by water, forests and the Aiken del Sur Park.

The hanging glaciers, lakes and waterfalls; splendid places where you can relax and listen to nature or practice water sports such as rafting and kayaking.

Some examples: Rio Simpson National Reserve where you can admire the condors, south Andean deer, and the starry sky; General Carrera Lake with emerald green waters and the Capillas de Marmol, as well as Lake San Rafael.

Make a mandatory passage through the village of Chile Chico! 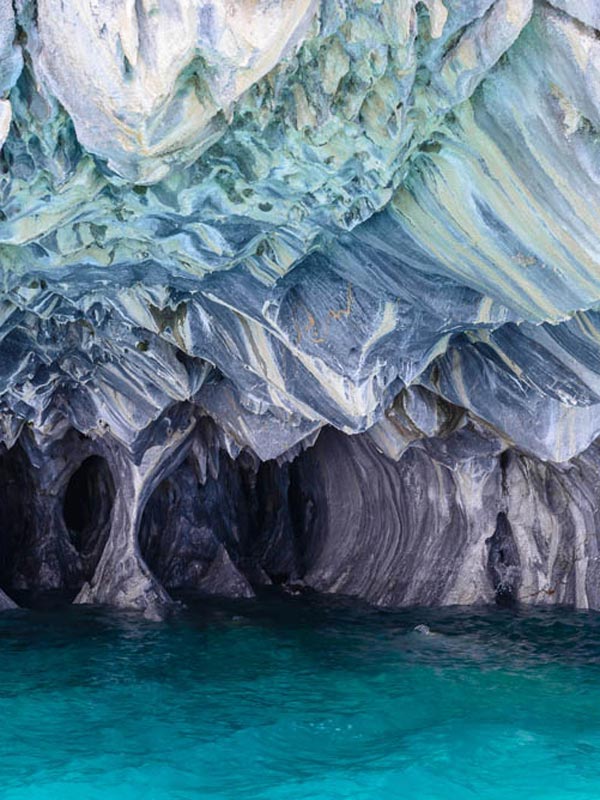 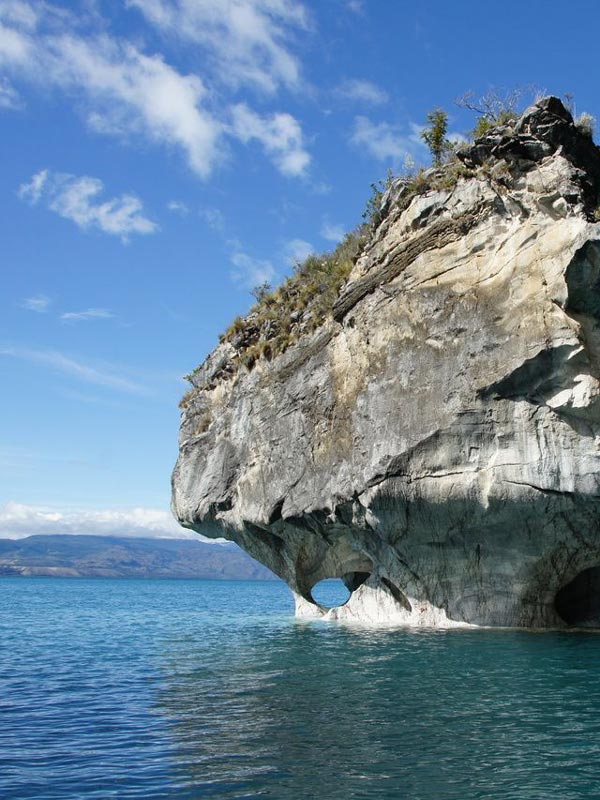 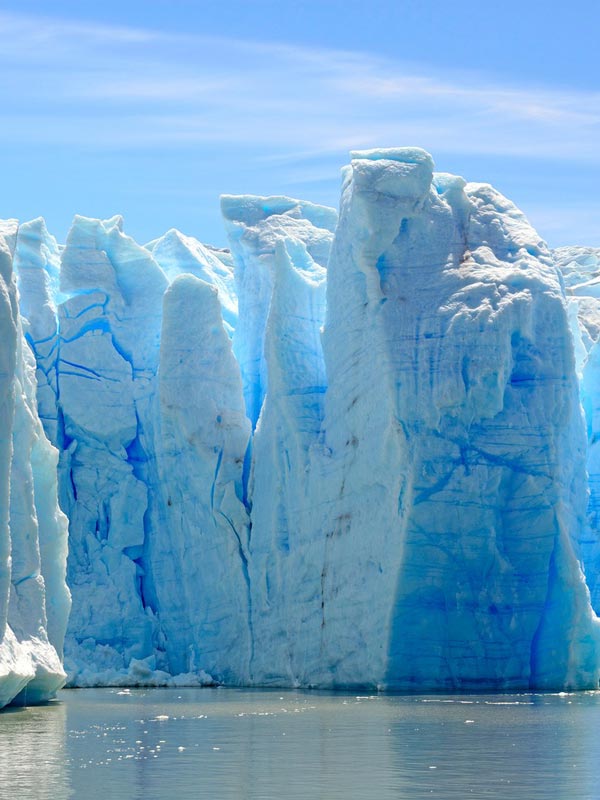 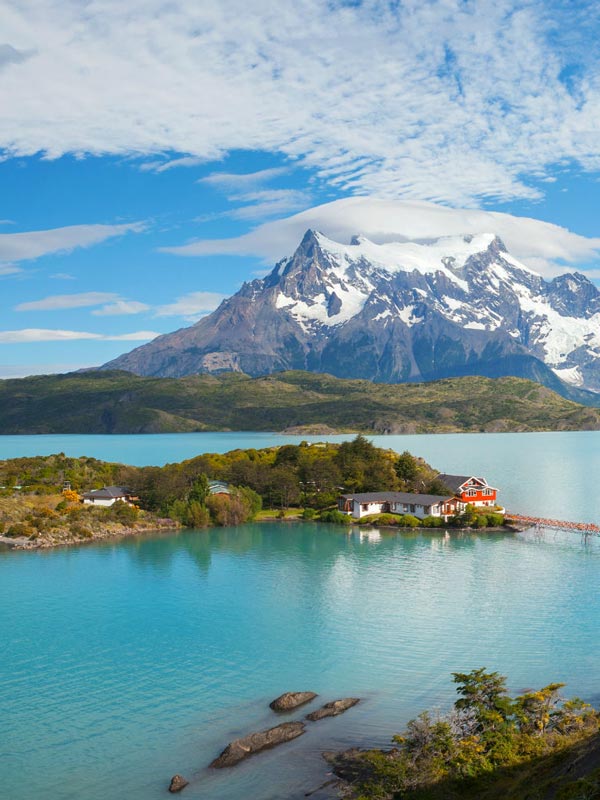 Torres del Paine is one of the most incredible destinations in Chile. It is a protected area of ​​224 000 hectares composed of lakes, glaciers, rivers, waterfalls and forests and named Biosphere Reserve by Unesco in 1978.

The immense nature with its Turquoise waters, glaciers, granite peak, is to be discovered on foot or by sailing through Gray Lake, with its white and blueish icebergs.

Do not forget your camera to immortalize your encounter with condors, foxes, south Andean deer, guanacos or even if you are lucky, the famous cougar.

Do not miss Villa Turistica Serrano River for its walks and its typical dishes ; Lake Pehoé, with crystal clear waters, overlooking Cuernos del Paine; and the cave of Milodon, formed of three caves where the mythical Devil’s Chair, can be found.

Puerto Natales is the gateway to the south of Torres del Paine National Park.

Climb to the top of Dorotea hill to observe the city at 800 meters altitude, you will discover a panorama of great beauty and can admire the fjord Ultima Esperanza and the Gulf Almirante Montt.

Take the wooden footbridge to go back down!

Head to the Southern Patagonian Ice Field to discover a huge expanse of ice that forms 49 glaciers. Then sail between the Balmaceda and Serrano glaciers, between the cormorant colonies and the sea lions.

The Bernardo O’Higgins National Park also represents the purity of the nature that makes up this southern region of Chile! 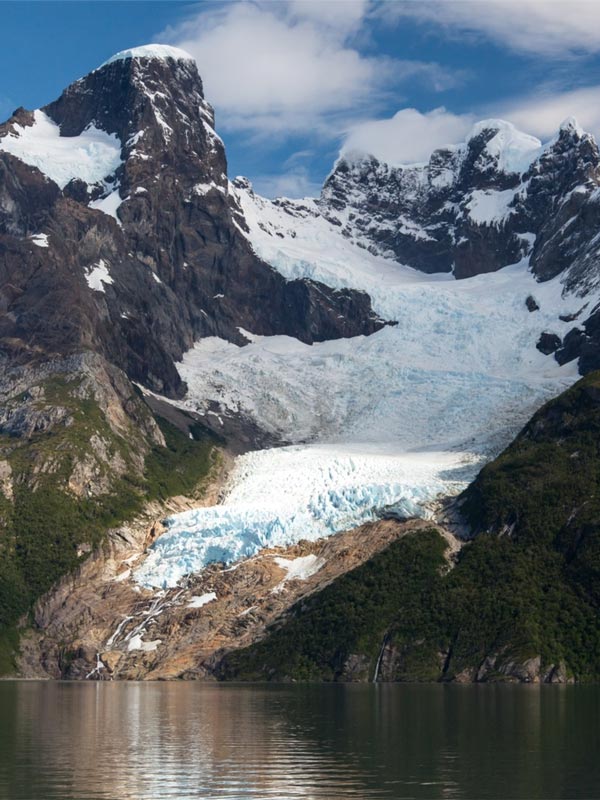 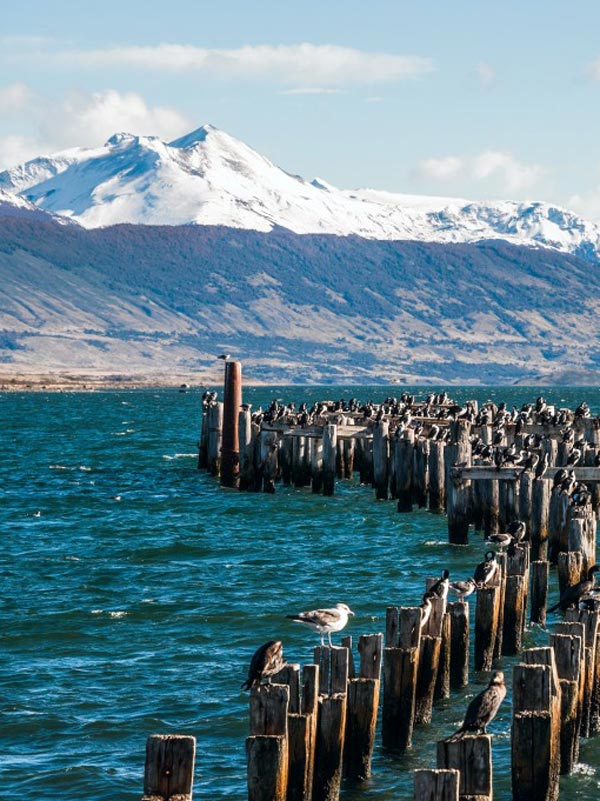 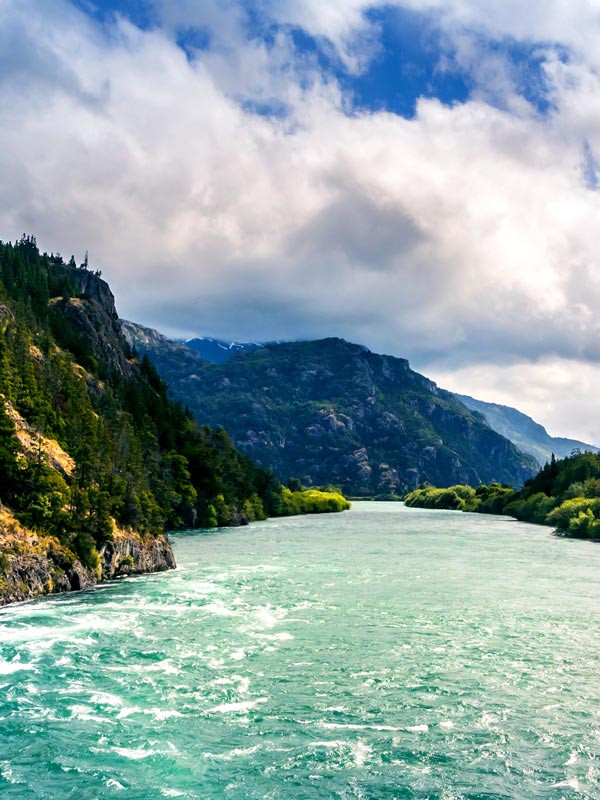 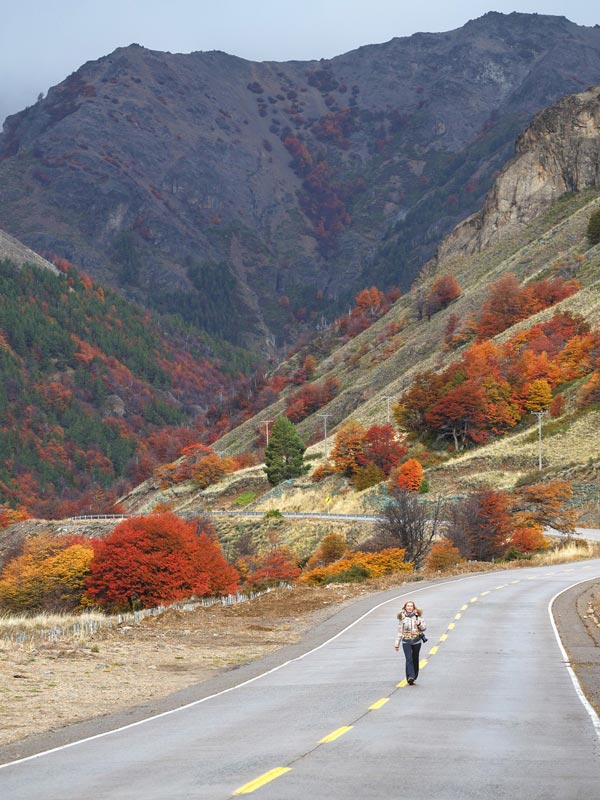 From Puerto Montt to Villa O’Higgins, cross no less than 1,200 km of natural beauty through Futaleufu, Cerro Castillo, Lake General Carrera and its marble cathedrals.

For the most experienced, the descent of the Futaleufu river by rafting is required! It is one of the highest elevations for this discipline in the world.

The Futaleufu National Reserve also protects two very important species of the region: cypresses of the Cordillera and south Andean deer. You can also admire the glaciers and Tortel Cove.

The Baker River, where fly fishing and kayaking are two very popular activities, between a dense forest, and refuge of many animal species. Herons, flamingos and condors are also to be discovered at Pumalín Park.

Do not miss Puyuhuapi: a thermal spa center in Puyuhuapi, a village known for its artisanal fabrics. Palena River: a sports fishing and observation site for Chinook salmon, sea bass and birds. You will also see southern dolphins who like to follow travelers’ boats. 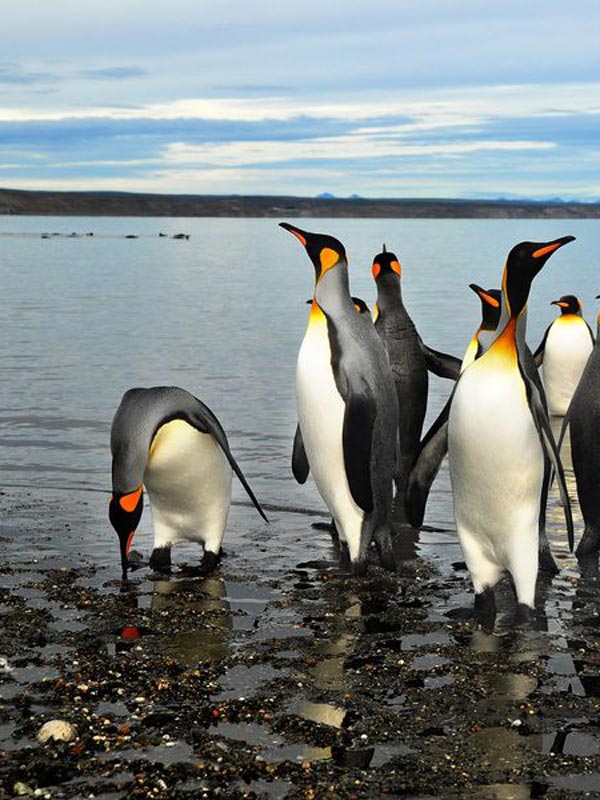 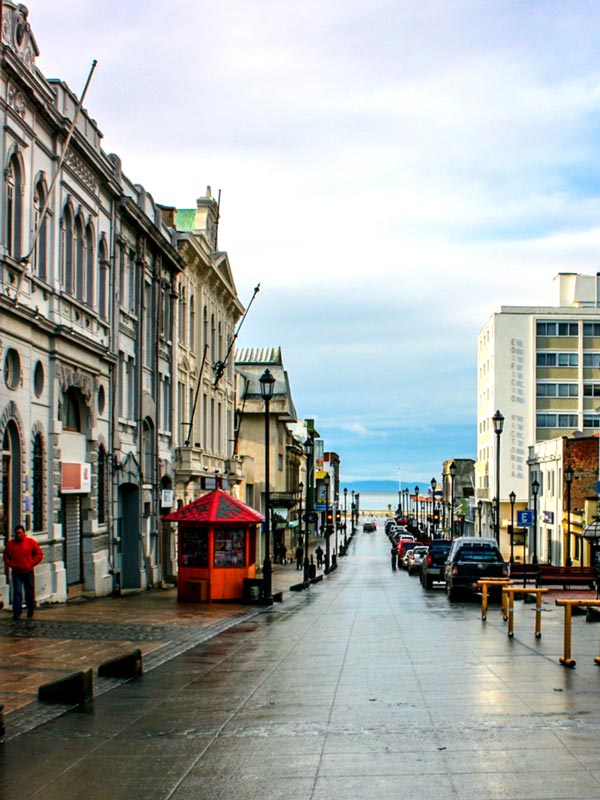 Punta Arenas is the passageway between the Atlantic and the Pacific discovered by Magellan in the 1550s.

It is located on the shores of the Strait of Magellan and is a gateway to the Antarctic continent.

Stroll through the city and pass through Central Plaza, dedicated to Magellan where a statue of two sitting Indians represent Patagonia and Tierra del Fuego.

Also pass in front of the statue of the unknown Indian, a striking monument. The Strait of Magellan is a wonder for all travelers, who are most often greeted by the thousands of seabirds that populate it.

Tierra del Fuego is a must stop for travelers!, you will discover the most extreme landscapes of Chile for its beauty and a change of scenery.

A walk in the park Karukinka, a natural park of 300 000 hectares or a hike between beech forests, snowy mountains to the Lake ‘Lago Blanco.

Go on an adventure to admire stunning views of the Darwin Mountain Range or Victoria Island.

You can also admire guanacos, wild horses, and condors! Discover the town of Porvenir on foot for its atypical coast, its museum Fernando Cordero Rusque, the lakes Fagnano, and Deseado a little further south of the city. 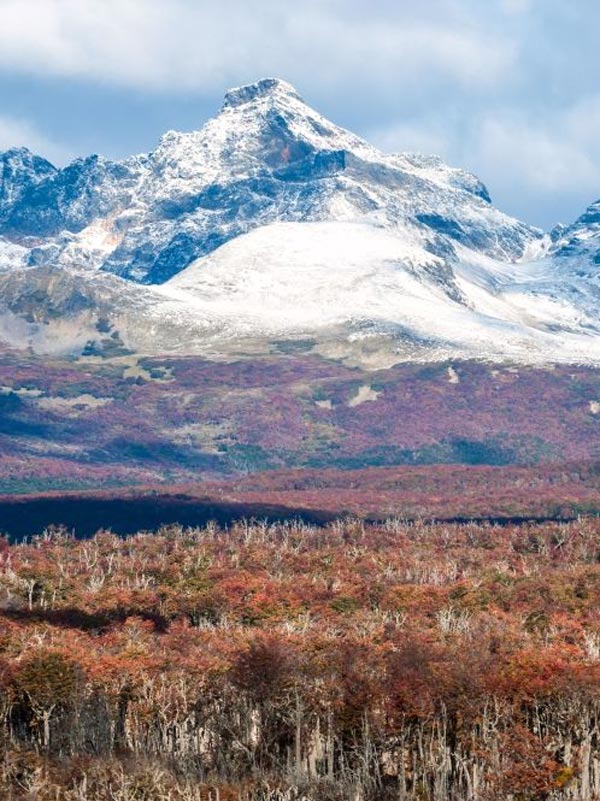 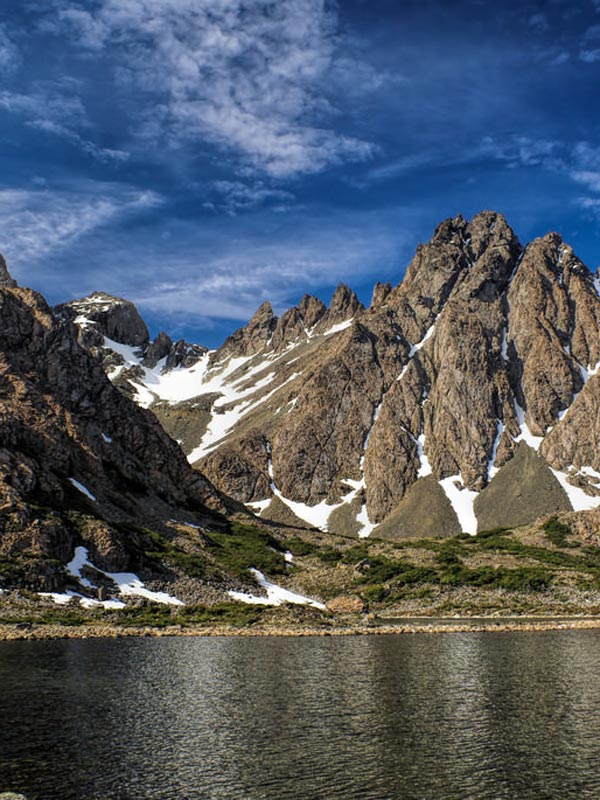 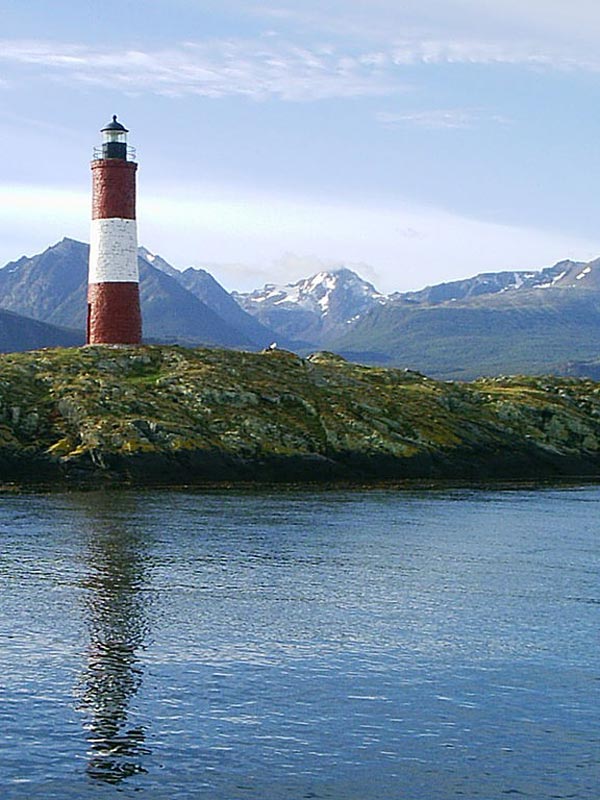 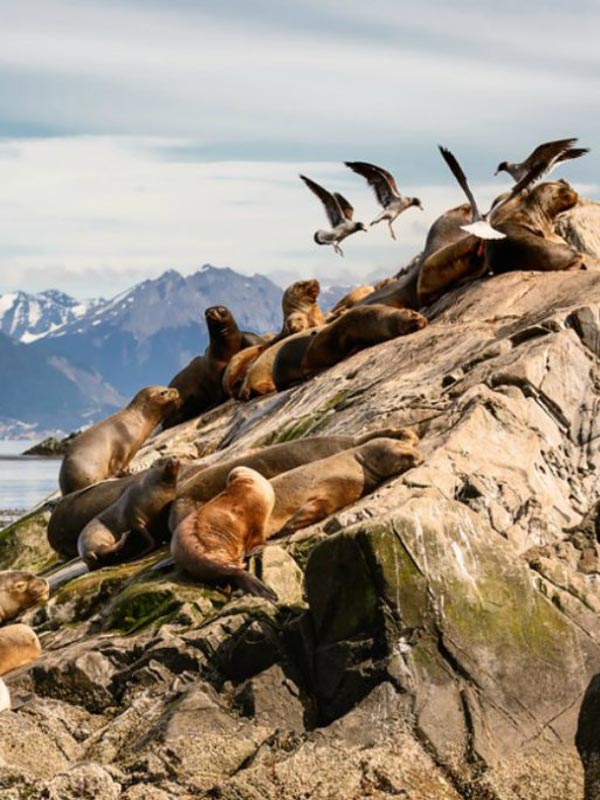 Port Williams for its landscapes as well as the Cape Horn National Park and World Biosphere Reserve for its great diversity and ancestral culture will make you want to travel back again. Discover Yagan and Yamana culture, which will captivate you. Do not miss the Beagle Channel and Navarino Island!

Then embark on a cruise ship in Port Williams to reach Cape Horn for a ride to the farthest reaches of the planet.

You can visit the Cabo de Hornos National Park and discover many animals, birds, sea lions, whales or leopard seals. 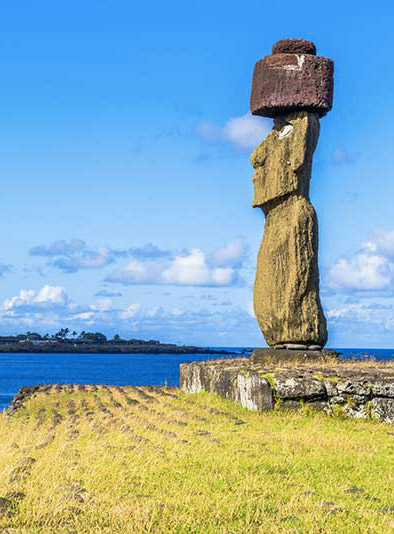 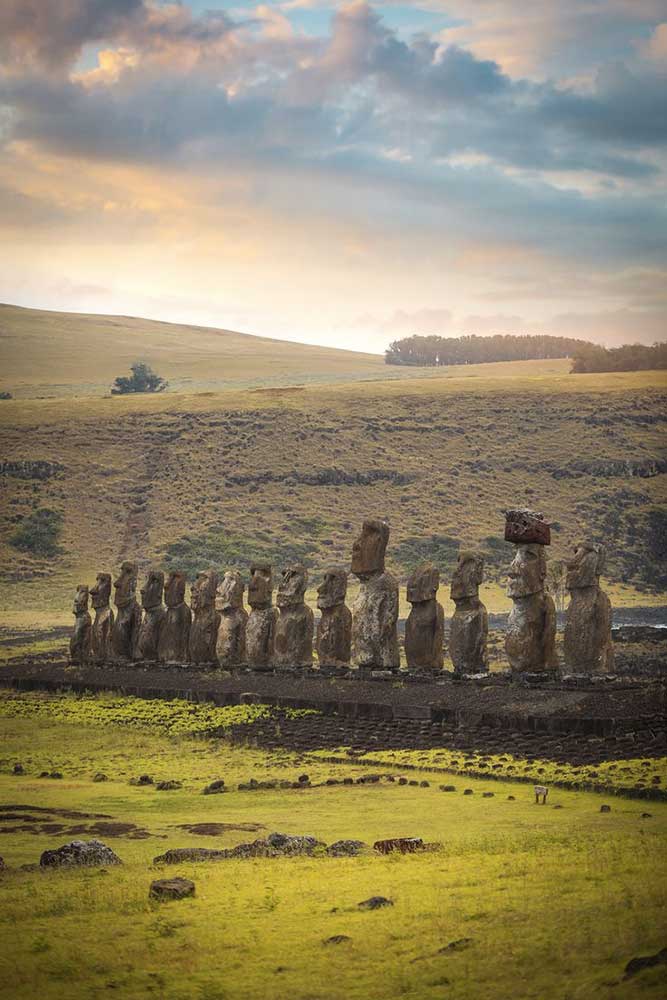 In the middle of the Pacific Ocean, the Island has seen the emergence and the decline of the Moaïs, the mysterious bird-man civilization, these giant statues, overlooking the sea, demonstrate their important value.

Hang Roa, the capital, is connected to the continent by flights leaving from Santiago de Chile.

NOT TO BE mISSED : 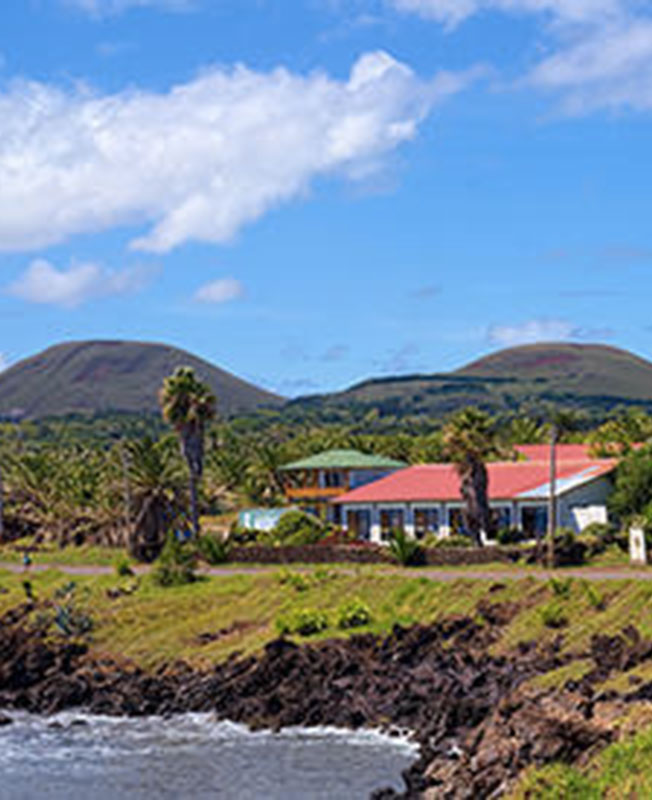 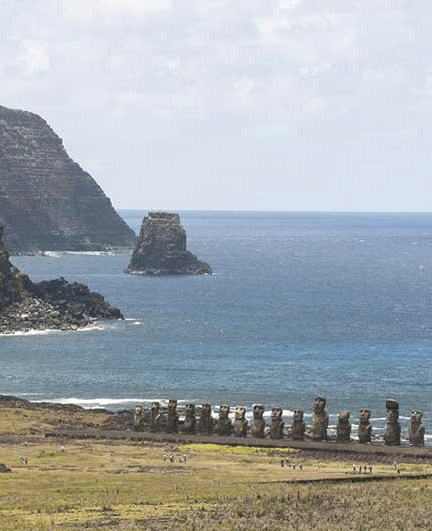